Violet Tweedale (1862-1936) was quite possibly the kind of Scotswoman who are not made any more.  Born as Violet Chambers, she was a member of the famous Edinburgh publishing family and became a novelist, short-story writer, spiritualist, member of the renowned occult society the Order of the Golden Dawn.  She was also a theosophist, traveller, philanthropist and more.  Her book Ghosts I Have Seen (1919), from which the passed below is culled, is a thoughtful and intelligent exploration of the interaction of the supernatural on this plane.  Her length account, quoted in full below, occupies ten pages of her book (pp. 165-74), and is a unique and complex tale.
Who is the Tudor styled lady spotted here and what is the unnamed entity which converses with the distinctly un-psychic Lord Wynford?  We will possibly never know.
Captain Eric Streatfield (of the Gordon Highlanders), mentioned in the account, died of consumption in South Africa in 1902.  Lord Wynford was William Draper Montague Best, 3rd baron Wynford.  His wife was another Scot, born Caroline Eliza Baillie, daughter of Evan Baillie of Dochfour.

At that period the great topic of conversation amongst ghost-hunters was Glamis Castle, the most celebrated of all haunted houses. No ghost book is ever considered complete without reference to this celebrated Castle, and the story usually narrated is, that in the secret room some abnormal horror lived, and that the heir, Lord Glamis, and the factor, had to be told of its existence by the Earl of Strathmore in person. This information was of so terrible a nature that it changed not only the lives of those two men, but even their personal appearance. They grew aged and haggard in a single night.  This story was readily discussed in old days by members of the Strathmore family, who were just as keen as outsiders were to probe the mystery. To-day it is universally believed that the monstrosity is at last laid to rest, and that though other ghosts still walk the Castle, the worst has departed forever.  I went one afternoon to see the Wynfords in the hotel in which they stayed whilst in Scotland, and found Lady Reay with them. She was a wonderful woman in her way, and preserved her youth up till very late in life. Lord Wynford was not present, and Lady Wynford at once greeted me by exclaiming, "We are going to stay at Glamis next week, and Lady Reay has been there and seen a ghost." 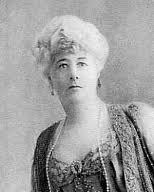 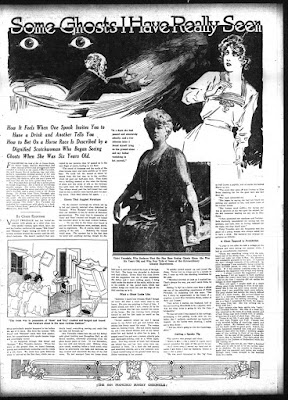 "At times they seemed to hold an argument; sometimes Wynford's voice was sharp and decisive,
at other times it was utterly weary and despondent.  I dreaded what the effect might be upon him of this awful night, but I could do nothing but lie shivering in bed, and pray for the morning.
" How long it went on for I can't say, but the conviction came to me suddenly that Wynford had
begun to pray. His voice was raised, and now and again I fancied I could hear words. The rasping
whisper came now only in short, sharp interjections or expostulations, I don't know which. The even flow of Wynford's words went quietly on, and I began to be certain that he was praying for the being who spoke with that terrible whisper. It occurred to me that he might even be trying to exorcise some unclean spirit.
" At last a silence fell. Wynford stopped praying, and I hoped that the terrible interview was
at an end. Then it began again, and for quite an hour the prayers went on, with long periods of silence in between. I heard no more of the terrible, husky whisper.
" I fell asleep again and did not awake till my maid brought me early tea. No sooner had she gone
than Wynford entered, fully dressed. Though he looked desperately tired and wan, he seemed quite composed, and as if some weight had been removed from off him. He said he was going for a stroll before breakfast, and, of course, I remembered my promise and put no questions. I have come to the conclusion that a hundred people may stay any length of time at Glamis and see or hear nothing. The hundred and first may receive such a shock to the nervous system that he never really recovers from it."
Such was the mysterious story that Lady Wynford unfolded. I saw her husband the next day, but beyond being graver than usual in his manner I detected no difference in him. He never referred, even in the most indirect way, to his visit, but he must have inferred by my silence that I had been warned not to mention the subject. Many others must, however, have done so, for every one, who at that period passed a night under Glamis Castle roof, was eagerly questioned by friends and acquaintances on their return.  The only occasion on which I visited Glamis was on the night of a ball, given in honor of the Crown Prince of Sweden. The curiosity of the guests was held in check by servants being stationed at certain doors, and entrances to corridors and staircases, to
inform rude explorers that they could not pass. It is hard to believe that such a course of action was necessary, but I personally watched little parties being turned back towards the ballroom and sittingout-rooms, showing that intense curiosity may even prove stronger than good breeding.
What Wynford saw that night will never be known, but one fact remains. It left so deep an impression upon him that he 'was never the same man again.  He became graver and more wrapped up in his own thoughts month by month, and the change that ended in his death his wife attributed to those nights passed in Glamis Castle. 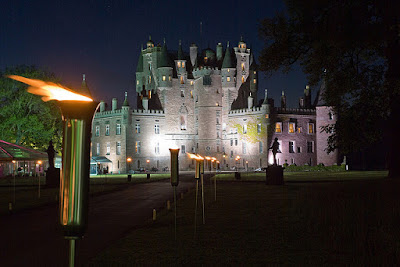 Posted by Keith Coleman at 09:55 No comments: