Two Victorians Who Should Have Written More On Glamis

Missed opportunities are the theme of the two men featured in this post.  Both men were extremely successful and busy in a Victorian way which boggles the modern mind; both would be surprised(or amused) to be accused of missing opportunities, but I am talking here specifically about what they wrote about Glamis Castle, or – specifically – what they did not write.  Scottish author Andrew Lang (1844-1912) wrote everything from folklore to history to fairy stories, and was therefore well atuned to testifying and analysing aspects of the Otherworld,  but he only chose to mention Glamis a brief fewtimes in his writingy.  One of these is in his comic poem ‘The Haunted Homes of England’ [sic.] from Lang’s book Ban and Arrière Ban:  A Rally of Fugitive Rhymes (London, 1894):

The Haunted Homes of England,
How eerily they stand,
While through them flit their ghosts – to wit,
The Monk with the Red Hand,
The Eyeless Girl – an awful spook –
To stop the boldest breath,
The boy that inked his copybook,
And so got ‘wopped’ to death!
Call them not shams – from haunted Glamis
To haunted Woodhouselea,
I mark in hosts the grisly ghosts
I hear the fell Banshee!
I know the spectral dog that howls
Before the death of Squires;
In my ‘Ghosts’-guide’ addresses hide
For podmore and for Myers!
I see the Vampire climb the stairs
From vaults below the church:
And hark! The Pirate’s spectre swears!
O Psychical Research,
Canst THOU not hear what meets my ear,
The viewless wheels that come?
The wild Banshee that wails to thee?
The Drummer with his drum?
O Haunted Homes of England,
Though tenantless ye stand,
With none content to pay the rent,
Through all the shadowy land,
Now, Science true will find in you
A sympathetic perch,
And take you all, both Grange and Hall,
For Psychical Research!

I get the feeling that Lang avoided any full-scale analysis of Glamis because he either found that the ‘mystery’ (of the Secret Room) was no mystery at all or that the market for peddling shabby legends and whispers about the haunted castle was rather overcrowded with dubious literary types he did not want to rub shoulders with.  Further evidence that he treated much of the reported supernatural world with disdain.  Glamis appears,again briefly, in rather strange surroundings in Lang’s Books and Bookmen (London, 1886).  In the chapter titled  ‘Some Japanese Bogie-Books’ Lang writes:

A somewhat similar and (to my own mind) probably sound theory of ghosts prevails among savage tribes, and among such peoples as the ancient Greeks, the modern Hindoos, and other ancestor worshippers. When feeding, as they all do, or used to do, the ghosts of the ancestral dead, they gave special attention to the claims of the dead of the last three generations, leaving ghosts older than the century to look after their own supplies of meat and drink. The negligence testifies to a notion that very old ghosts are of little account, for good or evil. On the other hand, as regards the longevity of spectres, we must not shut our eyes to the example of the bogie in ancient armour which appears in Glamis Castle, or to the Jesuit of Queen Elizabeth’s date that haunts the library (and a very nice place to haunt: I ask no better, as a ghost in the Pavilion at Lord’s might cause a scandal) of an English nobleman. With these instantiae contradictoriae, as Bacon calls them, present to our minds, we must not (in the present condition of psychical research) dogmatise too hastily about the span of life allotted to the simulacrum vulgare. Very probably his chances of a prolonged existence are in inverse ratio to the square of the distance of time which severs him from our modern days. No one has ever even pretended to see the ghost of an ancient Roman buried in these islands, still less of a Pict or Scot, or a Palaeolithic man, welcome as such an apparition would be to many of us. Thus the evidence does certainly look as if there were a kind of statute of limitations among ghosts, which, from many points of view, is not an arrangement at which we should repine. 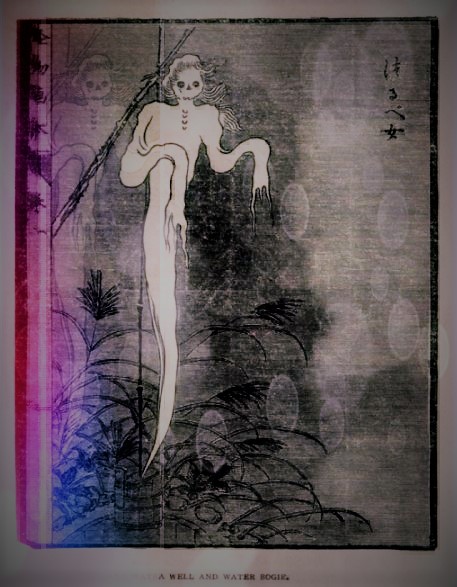 Again, in his Book of Dreams and Ghosts (London, 1897), Lang gives another unsatisfactory snippet about Glamis:

Here it may be remarked that apparitions in haunted houses are very seldom recognised as those of dead persons, and, when recognised, the recognition is usually dubious. Thus, in February, 1897, Lieutenant Carr Glyn, of the Grenadiers, while reading in the outer room of the Queen’s Library in Windsor, saw a lady in black in a kind of mantilla of black lace pass from the inner room into a corner where she was lost to view. He supposed that she had gone out by a door there, and asked an attendant later who she was. There was no door round the corner, and, in the opinion of some, the lady was Queen Elizabeth! She has a traditional habit, it seems, of haunting the Library. But surely, of all people, in dress and aspect Queen Elizabeth is most easily recognised. The seer did not recognise her, and she was probably a mere casual hallucination. In old houses such traditions are common, but vague. In this connection Glamis is usually mentioned. Every one has heard of the Secret Chamber, with its mystery, and the story was known to Scott, who introduces it in The Betrothed. But we know when the Secret Chamber was built (under the Restoration), who built it, what he paid the masons, and where it is: under the Charter Room.  These cold facts rather take the “weird” effect off the Glamis legend.

Lang is referring to the extensive remodelling 74work at Glamis which is recorded to have been undertaken in the Book of Record by the 3rd Earl of Strathmore in the late 17th century.  Yet, even if that disposed of the legend of the ‘Secret Room’ (which it does not), there were plenty of other stories and lenegds associated with the castle whichg Lang could have delved into, but chose to avoid.  The tone and content of the above quotes may suggest that Andrew Lang adopted a uniform scepticism to the matters of the supernatural, but that is not the case.  He was the president of the Society for Psychical Research in 1911 and his non-fiction works, particularly his books on history, are considered and thoughtful.  So it must be considered a pity that this author did not extend his interest to Glamis Castle.

In a letter to Mrs Herbert Mills on 23 August 1908 (Lang archive at St Andrews university) the author tells his correspondent about a stay he had at Glamis Castle.  There was was a game of cricket where Lord Strathmore excelled and a little girl – later the Queen Mother – offered him a lovely Persian kitten, which he refused.  However:  ‘the ghosts laid low’.  Yet another missed opportunity from this renowned writer.

The second Victorian under consideration is Lyon Playfair, later Lord Lyon of St Andrews (1818-1898).  As his forename suggests he had a family connection with the family of Glamis, despite being born in India.  His grandmother’s family belonged to the branch of the Lyons who came from Glenogil in Angus. He pursued a career as a chemist initially before gravitating towards politics in the Liberal party.  Like his uncle, the Meigle born soldier Hugh Lyon Playfair he had a long association with St Andrews (both men were buried there). 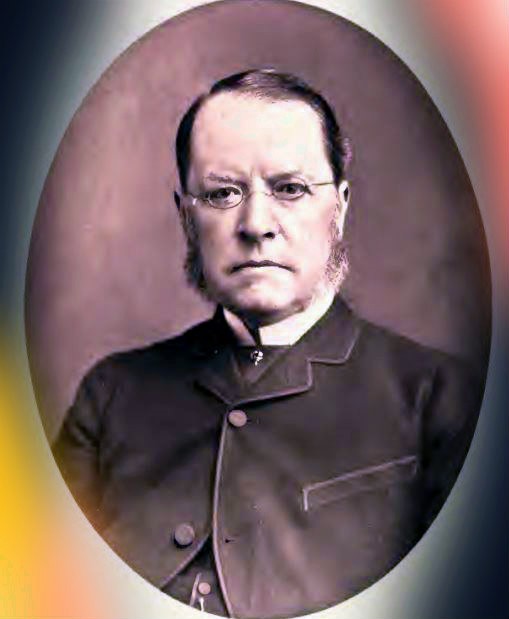 Playfair maintained an intermittent contact with Glamis Castle through his life.  Returning to Scotland from India some of Playfair’s holidays were spent in the manse of his great-uncle the Rev Dr Lyon at Glamis.  He described the kirk, manse and castle of his boyhood as follows (Memoirs and Correspondence of Lyon Playfair, ed. Wemys Reid, London, 1899):

The old manse is a comfortable minister's house, surrounded by a garden containing one of the oldest of Scotch monuments. The church itself was close to it, in a primitive churchyard without beauty, and then kept in a careless way. At that time the fine old castle was not inhabited by Lord Strathmore. The whole estate was under the management of trustees, of whom my uncle was one, and so the castle and grounds were open to me without risk of being considered an intruder. I naturally busied myself with trying to discover the famous secret chamber, and the awful mystery connected with it. I drew my own conclusions, which were probably as erroneous as those which have been made by others in regard to this mystery. Although my uncle had the same
name as the Earls of Strathmore, he belonged to the Glen Ogle Lyons, a collateral branch of the family. At that time the two branches had become close in the line of descent,
though now they are again widely divergent.
The park round Glamis Castle is extensive, and has a small stream running through woods. A deep pool, in a sequestered spot, was my favourite haunt, at which I spent many hours of meditation, for I had no playfellows at the old manse. I believe that this lonely pool, surrounded by trees, taught me to feel that happiness depends upon one-self as much as upon one's surroundings. The family of my uncle consisted of his wife and two daughters. The old minister himself was simple and worthy. Daily I would drive out with the grey-haired old man, in a gig drawn by a horse which could not go beyond five miles an hour, but was believed by the owner to be one of the best and fastest horses in the kingdom. The good old man went at the same relative pace in his parochial duties. The minister's wife, my dear old aunt, lavished upon me the love of a mother to a child. Two charming young ladies, my cousins, made my stay at the manse as agreeable as possible, and I returned with gladness at each vacation. They are all dead long since, but my memories of their love and kindness live fresh within me.

Playfair’s busy life meant he did not visit Glamis again for nearly sixty years.  While he and his wife were staying at Kinnordy House, near Kirriemuir, in 1885 he was invited to the castle with his wife.  Playfair wrote:

It was all wonderfully changed and beautified, but it was the old Glamis still. We went to the top of the castle, and I explained to my wife all the points of interest connected with my life as a boy at this place. Lady Strathmore was full of sympathy with my memories, and insisted on being my guide to see the manse, which I found very little changed, my reflecting haunt by the old pool, and the other objects which I remembered so well. She even showed me a secret chamber, though not the secret chamber which has defied so many keen inquirers. It was delightful to me to see the castle again inhabited by an Earl of Strathmore, who has restored it so as to make it worthy of its great history. In the old hall of the castle we witnessed an operetta written by a son, and acted by the sons and daughters, of our hosts, and most admirably it was performed. 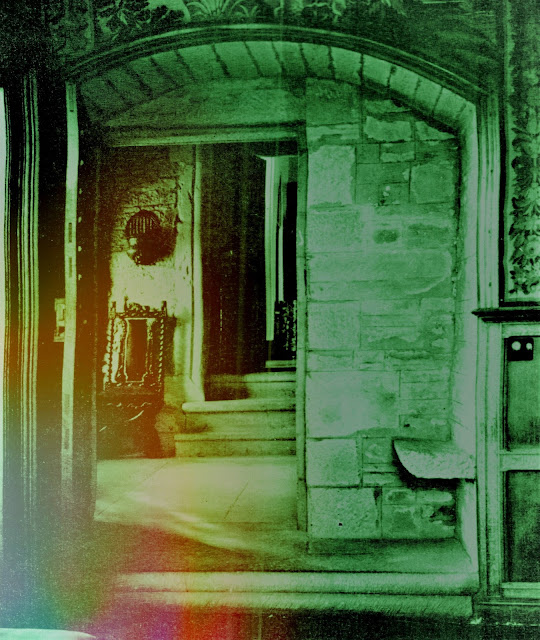 Posted by Keith Coleman at 12:59 No comments: