From USA to Scotland: 'The Strathmore Mystery'.

The article below appeared in the Dundee 'Courier' on Wednesday April 3rd, 1895.  A point of interest is that Dundee is, of course, not many miles south of Glamis Castle itself.  Yet her was a local newspaper essentially recycling a tall tale culled from a foreign publication - 'Harper's Magazine' of New York - which demonstrates that versions of the 'Glamis Legend' were already been churned out by the late Victorian myth-making machine. 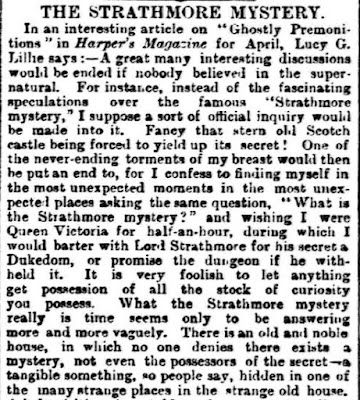 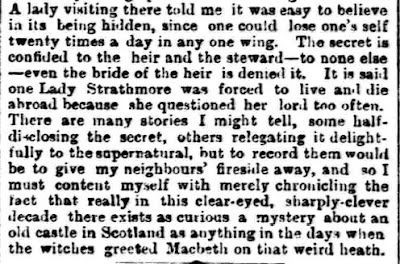 The source for the Scottish newspaper story is an article titled 'Ghostly Premonitions,' by Lucy B. Lillie (Harper's New Monthly, vol. XC, 1894-5,  pp. 75-79).  The best bit is, of course, the imaginary banter between the monarch and the owner of Glamis.  But where did she get the notion that a particular Lady Strathmore got a one way ticket overseas for being too audaciously inquisitive?


A great many interesting discussions would be ended if nobody believed in the supernatural. For instance, instead of the fascinating speculations over the famous 'Strathmore mystery,' I suppose a sort of official inquiry would be made into it. Fancy that stern old Scotch castle being forced to yield up its secret! One of the never-ending torments of my breast would then be put an end to, for I confess to finding myself in the most unexpected moments and in the most unexpected places asking the same question, 'What is the Strathmore mystery?' and wishing I were Queen Victoria for half an
hour, during which I would barter with Lord Strathmore for his secret a dukedom, or promise the dungeon if he withheld it. It is very foolish to let anything get possession of all the stock of curiosity you possess. What the Strathmore mystery really is, time seems only to be answering more and more vaguely. There is an old and noble house, in which no one denies there exists a mystery, not even the possessors of the secret, a tangible something, so people say, hidden in one of the many strange places in the strange old house. A lady visiting there told me that it was easy to believe in its being bidden, since one could lose one's self twenty times a day in any one wing. The secret is confided to the heir and the steward— to none else—even the bride of the heir is denied it! It is said one Lady Strathmore was forced to live and die abroad, because she questioned her lord too often. There are many stories I might tell, some half disclosing the secret, others relegating it delightfully to the supernatural; but to record them would be to give my neighbors' fireside away, and so I must content myself with merely chronicling the fact that really in this cleareyed,  sharply clever decade there exists as curious a mystery about an old castle in Scotland as anything in the days when the witches greeted Macbeth on that weird heath. 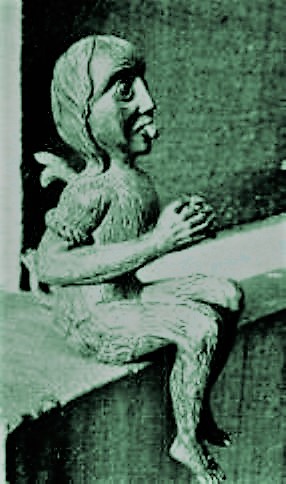 Posted by Keith Coleman at 11:46 No comments:

What is the Lion Cup of Glamis?  Is it cursed, and why should we care?  Here is one-time famous ghost hunter Elliott O'Donnell on the subject (Byways of Ghost-Land, London, 1911, p.168): 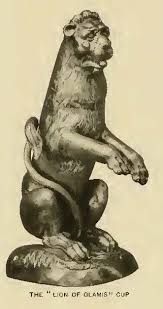 The family of Lyons were in possession of a talisman in the form of a "lion-cup," the original of Scott's "Blessed Bear of Bradwardine," which always brought them luck till they went to Glamis, and after that they experienced centuries of misfortune.

We can backtrack to the early 19th century to look at Scott's own comments. In an earlier post I gave a version of Scott's own note to his novel Waverley, describing the cup at Glamis.  It is given below in a fuller version.

The poculum potatorium of the valiant Baron, his blessed Bear, has a prototype at the fine old castle of Glamis, so rich in memorials of ancient times. It is a massive beaker of silver, double gilt, moulded into the shape of a lion and holding about an English pint of wine. The form alludes to the family name of Strathmore, which is Lyon, and when exhibited the cup must necessarily be emptied to the Earl’s health. The author ought, perhaps, to be ashamed of recording that he had the honour of swallowing the contents of the lion, and the recollection of the feat served to suggest the story of the ‘Bear of Bradwardine’. In the family of Scott of Thirlestane (...Roxburghshire) was long preserved a cup of the same kind, in the form of a jack-boot. Each guest was obliged to empty this at his departure.  If the guest's name was Scott, the necessity was doubly imperative.

As I reported before, Sir Walter Scott visited Glamis Castle first in 1793. Interesting, I think, that he does not actually name the vessel or give it any supernatural attributes. Scott would likely have recorded any dark legends that he found there.  Was the legend about the cup invented after his time?  Before leaving the castle in the morning he took a hefty drink of spirits from the Lion Beaker (or Lion Cup), and got so drunk that he lost his way on the road. In Waverly the Bradwardines inhabit the old Perthshire castle of Tully-Veolan.  The family heirloom is 'a golden goblet of a singular and antique appearance, moulded into the shape of a rampant bear', representing the crest of the Bradwardine family.  The vessel had been wrought, according to family legend, 'by the command of Saint Duthac, abbot of Aberbrothock' (Arbroath).

Trying to find the approximate evolution of the story about the Cup is difficult, though it may be fair to say that it formed in parallel of the main Glamis Legend, or possibly slightly in its wake, being invented to give more wight and depth to the mystery of the family and castle in the last years of the 19th century.  A few decades later the legend had matured and was regularly appearing in print.  Below is the version given by Charles R. Beard in his Lucks and Talismans, A Chapter of Popular Superstition (London, 1920. pp. 41-42):

It [the Cup] is said to have come into their possession towards the close of the fourteenth century when John of Forteviot, surnamed the 'Whyte Lyon'...was the lord of Glamis. Whence and how it cae to them is apparently not recorded; but the general impression would seem to be that it was acquired by some piece of chicanery or act of despotic violence, appropriate to that distant period.  And since then, the history of the family has been darkened by a long series of tragedies for which, so it is said, the Cup has been responsible. It has even been asserted that if the Cup should ever be parted with or lost extinction awaits the family...

The following quote is from The Days Before Yesterday, published in 1920, written by Lord Frederick Spencer Hamilton:

It was in this year that Sir John Lyon, Baron Forteviot, was given the lordship by Robert the Second, King of Scotland, whose daughter he had married. Among other honours conferred upon him was that of Great Chamberlain of Scotland, but he ended in a duel in 1383. It was this Sir John who brought with him to Glamis a kind of family curse, the famed "Lion Cup," a hereditary possession whose ownership is said to have caused many tragedies in the family. The plain man at this point naturally inquires why this accursed goblet was never thrown away, or at least sold, or given to some unsuspecting beneficiary against whom the Lyon family nursed a grudge, after the old Scots sort. But your plain man has no business here with family curses or spooks. Inquiry would, however, probably disclose the fact that the several disasters and violent endings of the Lyons were due less to the ownership of that item of gold plate than to the ferocity of themselves and their times. 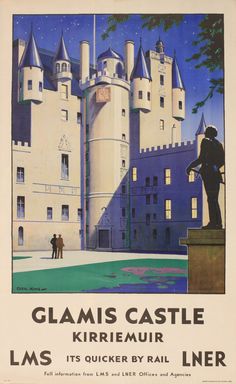 There is a wonderful collection of old family dresses of the seventeenth and eighteenth centuries, and above all there is the very ancient silver-gilt cup, "The Lion of Glamis," which holds an entire bottle of wine, and on great family occasions is still produced and used as a loving-cup, circulating from hand to hand round the table. Walter Scott in a note to Waverly states that it was the "Lion of Glamis" cup which gave him the idea of the "Blessed Bear of Bradwardine." In fact, there is no end to the objects of interest this wonderful old castle contains, and the Lyon family have inhabited it for six hundred years in direct line from father to son.

Beyond this, my trail of research goes dead... at the moment. More will be posted when I discover more.

Posted by Keith Coleman at 04:34 No comments: