Modern Literature - What Can We Do With Monsters?

So much of the legends of Glamis are wrapped up in the curious late Victorian gothic imagination that it hard to accept they could have arisen and flourished in any other setting.  True, the story of the Monster of Glamis has been repeated in many popular books about ghost stories and legends throughout the 20th century and into the present one.  But mostly it is just repetition, with little new added, and a sad lack of imagination.

Yet, at the core of the story there are magnificent themes which deserve to be explored and it's possibly a wonder that fiction writers do not make more of the general ideas encapsulated in the legends. One who did was the English historian William Croft Dickinson.  For much of his working life he was based in universities in Scotland and, naturally, his output was mainly devoted to his field of expertise.  One the side, however, he wrote speculative fiction, including ghost stories with an academic slant, somewhat in the style of M. R. James.

His 1963 collection called Dark Encounters contains a striking story called 'The House of Balfother', and it begins with this speculation:

I sometimes wonder about those traditional immortals who live in secret chambers, like Earl Beardie at Glamis. Do they grow older and older?  Do the years weary them?  Or do they live on and on at exactly the same age? That's the worst of legends...they leave too much to the imagination.
Well, if Earl Beardie is growing older and older,his beard must be mighty long by now, after some four hundred years...Unless at some point in time, or at some given length, a man's beard ceases to grow.

In the story a man encounters a sad, shrunken immortal who has been cursed never to day by being given an elixir of life by the alchemist John Damian, at the behest of King James IV in the 16th century.  The king wants to see how long he will live (although of course he knows the man will long outlive him) and protects the house in which the creature must remain.  But the family and the creature are doomed when, in the 17th century, they are caught up in the witchcraft frenzy, then condemned and burned.  The modern protagonist merely witnesses and interacts with their ghosts.  So much, so good. Why couldn't the Glamis monster legend show as much imagination in its modern version.  Unfortunately, like Beardie, it is trapped in a particular time.  Its beard may have grown, but there is no added fullness in the re-telling. 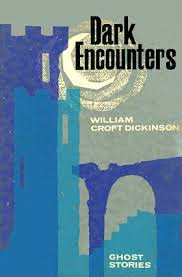 Another modern work which has crossed my radar recently is Murder at Glamis Castle.  2004.  This is the ninth book in an Edwardian mystery series written by Robin Paige, the pseudonym of Americans Susan Wittig and Bill Albert.  The story plays fitfully with the Glamis legend, and one character at Glamis tells the female protagonist 'Yer ladyship had best keep tae yer room i’ the castle, partic’larly when night cooms.'  This does not bode well for the prospects of good literature, but in fact the story moves along nicely, with the main story dealing with a lord and lady pair of investigators examining the murder of a servant woman who had been looking after the mentally disturbed recluse who is of course the rightful heir.  The future Queen Mother also gets a cameo and there is a lot of stuff about German spies.  But no great imaginative fictionalised leap forward with the Glamis mythos, I'm afraid.  The description of the castle is given in florid terms which gothic fiction fans would surely lap up:


At this first glimpse of Glamis, Kate pulled in her breath, scarcely believing what she saw. A towering central keep, splendid with a fanfare of conical spires, pepper-pot turrets, and a rippling flag, rose magnificently above the crenellated parapets of the wings flung out on either side. The castle was entirely constructed of a warm reddish-gray stone, glistening softly with damp, and its many casements reflected the pale morning light like glittering diamonds set into the stone. It rested in the lap of the soft, green meadow, behind it rising the far-off peaks of the Grampian Mountains, their ridges dusted with an early snow. Even on such a gray and gloomy day as this, Glamis was a fairy jewel in a setting of otherworldly beauty.