While I take a short (and possibly well-deserved) break from my blogging schedule, can I bring your attention to my recently published book, The Afterlife of King James IV, published by Chronos Books.

This work is very much an alternative history of one of the best beloved Scottish monarchs, King James IV, who died at the Battle of Flodden in 1513.  Or did he?  There were persistent rumours that the monarch survived the battle, being either captured by the English, rogue nobles in the Scottish army, or taking himself away on a spiritual, one way journey from the Holy Land. So, a raft of conspiracies theories which were born out of the bloody mire and confusion of battle?  That's true, but there was certainly more, uncommon intrigue afoot.  The tantalising image and reputation of the king - plus the possibility of his murder or survival - were tangible elements in the tempestuous politics of the post-Flodden period. The king's own wife, Margaret Tudor (sister of King Henry VIII) fully indulged in the intrigue, for her own purposes, claiming that James IV survived for several years after the fateful battle.

More than this, the king was also linked to the Otherworld, with several strands of tradition aligning him with the theme of the Undying King, whose interest in the recondite traditions of his realm prompted his removed from the physical world, a captive in Fairy Land.  The persistent legends of his links with this realm are evident in witch trials and resurface in subsequent centuries, a fascinating ingredient in the postmortem reputation of this most alluring Stewart monarch. 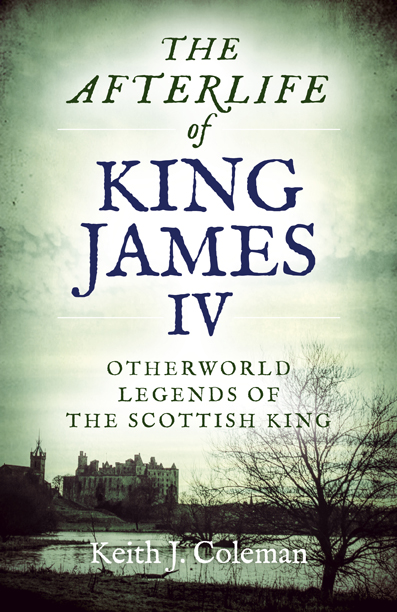 Posted by Keith Coleman at 02:08 No comments: