It is hard to find evidence of local traditions about Glamis Castle in the county of Angus, or the wider vale of Strathmore.  The huge weight of the accepted, written evidence about the haunting of the castle mean that these receive more attention and the same, rather tired stories are repeated ad nauseam.

One marvellous resource however is the website Tobar an Dualchist, Kist O Riches.  This is an extraordinary repository of legend, folklore, tunes, local lore and tradition, based mainly on the recording archive of the School of Scottish Studies in Edinburgh.

The following story about Glamis was narrated from personal experience by Betsy Whyte, one of a famous kindred of travelling kindred from Gowrie and Angus.  It was recorded for posterity in 1979, but goes back to the time of Betsy's childhood (she was born in 1919).  Her widowed mother and another woman were working on a potato farm near Glamis and the two women went to the pub in Kirriemuir, sending the children to the cinema.  On their way home the women and children [paused at the gates of Glamis Castle, where the inebriated women spoke to the devils carved there and generally made a lit of noise, so the children went on ahead.  Betsy got the fright of her life when she saw a calf on the road home, for her mother had just warned her that the Devil often appeared in the form of a calf!

When the women were next in Kirriemuir, a few days later, they read in the newspapers that the ghost of Glamis had been heard again, several days previously, and were in no doubt that their own merry making had caused the report. In such a way legends are formed.  Betsy, like most of the local travelling people, firmly believed that Glamis Castle was haunted.

(Betsy's telling of the story can be heard here.)

Elsewhere on Tobar an Dualchais (here), Betsy's husband Bryce Whyte gave his version about the legend of Satan playing cards at Glamis Castle.  The Laird of Glamis was notorious for playing (and winning) against local farm owners in the neighbourhood.  He had a special room in the castle for gambling and a young servant had to keep guard at the door.  One evening the Devil went in to play with the Laird, who knew straight away who his opponent was.  The Laird kept on winning against his dark opponent and to make sure of his enemy's identity he dropped a card on the floor and saw the cloven feet beneath the table.  Around midnight, Satan became enraged at constantly losing and asked if the Laird knew he was playing against.  Glamis said he knew full well and bade his opponent a polite farewell when he was leaving.  On his way out, the furious Devil broke off part of the building, which could never afterwards be repaired.  (Temporary fixed were made, but the repairs always crumbled away.)  In that part of the castle was the mysterious, haunted 'dark room'. The pageboy who sat outside the gambling room eventually sat there so long that he froze to death.  This location in the castle is always freezing, even on the warmest day.

It is interesting how this oral version of the Satanic card game differs from the printed texts, where the player is invariably Earl Beardie (in real life the Earl of Crawford, but in some tales he is the owner of Glamis).  The detail of the Deil destroying the battlements in a post-poker huff is also a lovely embellishment.

A further superstition related by the Whytes (here) tells how newly employed maids, on their first working day at Glamis, were pursued by a barrel tumbling down the stairs towards them, and propelled by an unseen agency.  The couple maintained that every owner of the castle came to a bad end and the current owner built himself another house rather than live there. 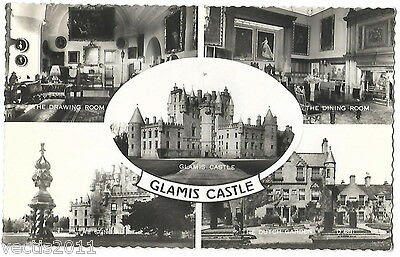